In the Autumn of every year, the Salmon & Trout Conservation Association hold a fund raising auction. I enjoy the thrill of auctions and tend to participate in this one, as well as those of the WTT and the Monnow Rivers Association, in the New Year, for all offer opportunities to access private waters of renown.

In the autumn of last year the generous offer by the Vale of Clwyd AC of two rods for a day on the Clwyd looked tempting because a hosted day on their waters suggested a tutored way for me to add Counties in North Wales to my Welsh ‘collection’, which suited. (It’s a bit like having a caddy let you know there is a stream over that rise to catch your tee shot, “so, put your driver away and hit a 5 iron, Sir”).

The VCAC has a remarkable eleven rivers in its portfolio, following the merger of the Denbigh and District AC and Clwyd AC clubs in 1991. Waters, from Snowdonia in the west, to the Dee on the English border in the east, and therefore in five counties! The exchange after I was notified of my ‘win’ connected me with Paul King, 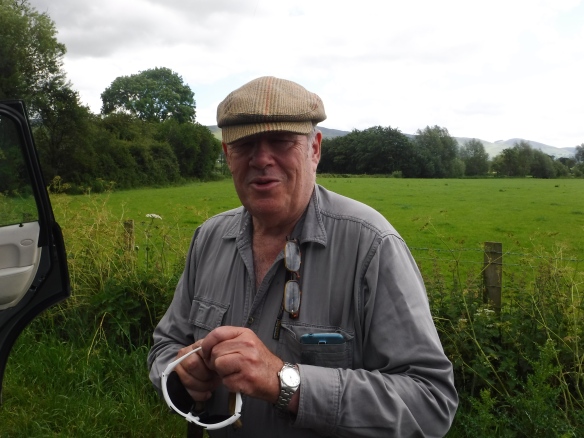 who I had met before after a day with Dave Smith on five Black Mountain streams, and that day, a ‘win’ on the MRA auction. Dave and I were enjoying a pint (probably a Wye Valley ale) at the Bell at Skenfrith, where Paul and his companion that day were doing the same. Paul readily embraced my quest, and was delighted to help me achieve more, and mindful of water levels after the most welcome (sic) rains of recent days, had plans ‘B’ and ‘C’ in mind if GaugeMap suggested ‘A’ might not work.

Paul surmised that the upper Clwyd, a lowland river, and highly susceptible to rain, would provide fishable water as levels were falling, and there was some colour in the river, but to an extent this was normal, so the effect of the heavy rains of previous days had washed through. Locally, the beats are referred to by the bridges which span them, and we headed to Pont Perfa near the village of Llanynys, 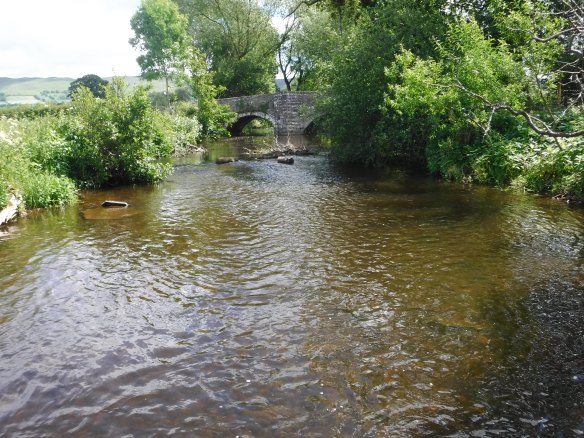 where on a bend just one hundred metres or so below the bridge, Paul had me cast into his ‘go to’ pool. 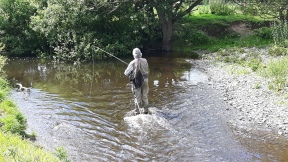 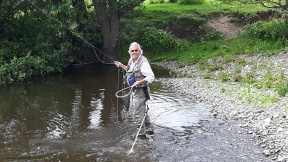 Under such pressure (!) my early morning casting into the cross steam wind was a little embarrassing, but ‘Damn me’ if a scrapper did not grab the #18 PTN drifting underneath my Foxon’s Klinkhammer, and once netted, 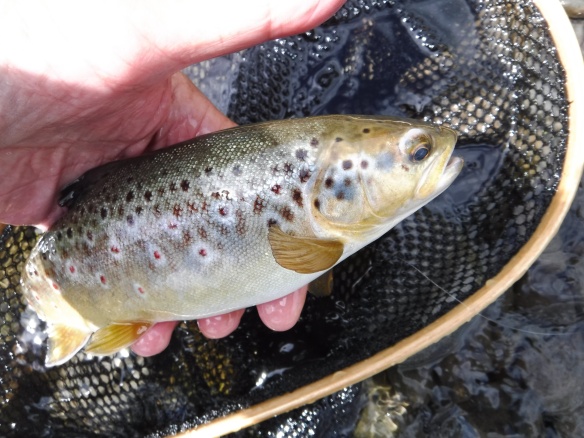 produced an exclaimed “mission accomplished!” from Paul, pleased with such early success, and expert guiding!

Actually this Denbighshire trout might have been netted even earlier had we not engaged in so much chatter! During one exchange when I revealed that I learned to fish as a schoolboy in Brecon, “A Christ College boy? One of our enemies”, it transpired that we were contemporaries, with he, down the road, so to speak, at Monmouth School. He captained the 2XV from the front row, and I was CBB’s 2XV scrum half, and we wondered whether we played against each other, all those years ago! Small world. A true countryman, with a proper, dirty Range Rover to boot, I learned much from his explanation of the technical aspects behind deer cull, ten-pointers and high seats. It helped put the annual cull in Royal Richmond Park, nearer to home, into perspective. And I enjoyed hearing about how his club is now using catch data, to understand the impacts of reducing the introduction of stocked fish. He hopes that eventually, the VCAC beats will be entirely wild.

Believing that we might be fishing another river in another county in the afternoon, we parted company so he could return home to feed his Labrador puppy, but I thought I had another Clwyd trout or two in me. “You might see Alan (Cuthbert) on the river” and I did. 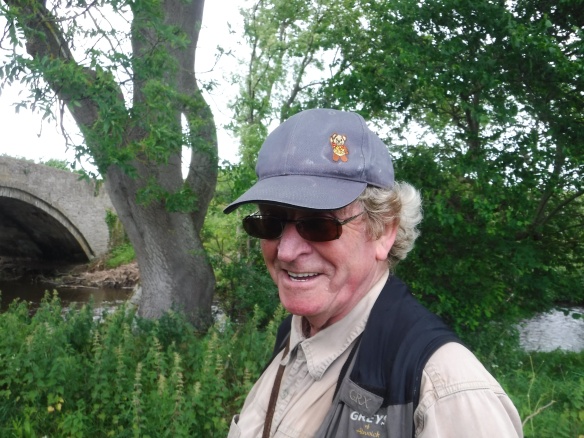 He is VCAC’s General Secretary, so knew of my visit, and quest. He was after an early season sea trout, that morning and eager to stay out, for he had not fished for a while.

I asked about the river above Pont y Campbwll, (the lower Clwyd) and he offered to show me his favourite lies. 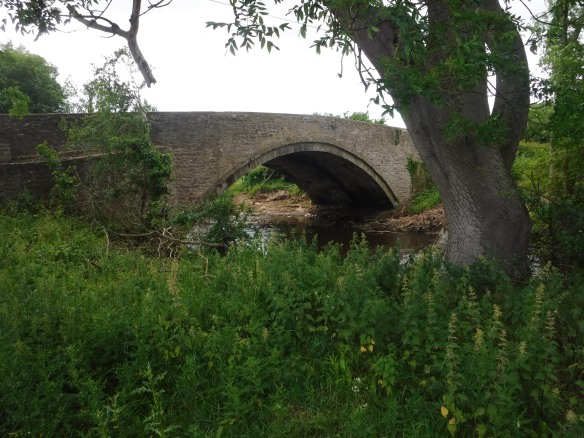 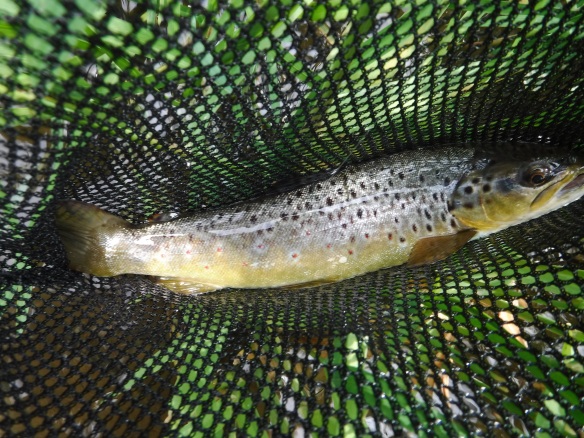 And these produced the two more I hoped for, and prompted my invitation to Alan to join me for a beer at the splendid pub in Bodfari, the Dinorben Arms, where I was to meet Paul before our next target. The banter between these two old chums was a joy to listen to! They are passionate about their fishing, their club and their river, and both do much to promote all three, as well to try to engage younger anglers, for their club, like so many has too few. But their efforts may pay off, for a special event just weeks before attracted sixty young hopefuls. A lesson for others, maybe?

Paul was not satisfied.

I had only added one County, this morning, and he knew that more were on offer, and so it was off to Conwy we went, and to the Elwy! This is a spate river and a tributary of the Clwyd, but rising high on the eastern fringes of Snowdonia.

Around the City of St Asaph (it has a cathedral), and onto the narrowest of country lanes, eventually we turned downwards and in the direction of Llannefydd, and toward the ancient Pont-y-Gwydell (the Irish Bridge) where we parked up. 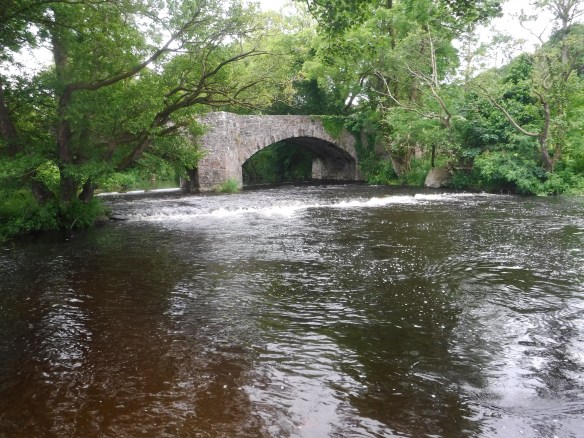 The sun shone, spinners were dancing in the bright light upstream of the bridge, and in the wide pool below it a fish or two showed…and quite quickly, one avid feeder came to my net, on a klinkhammer. 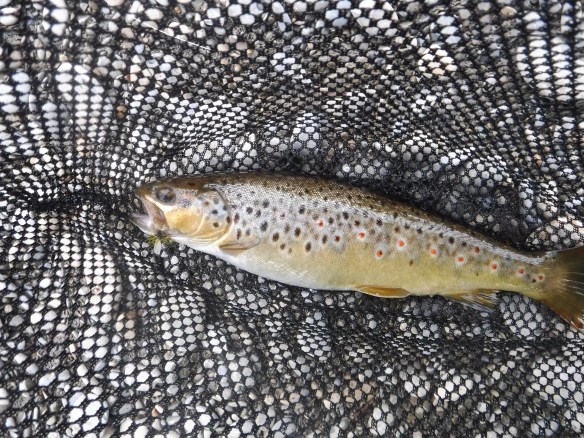 I did not stay long, for the rains promised for the late afternoon, did…but, I did not care. 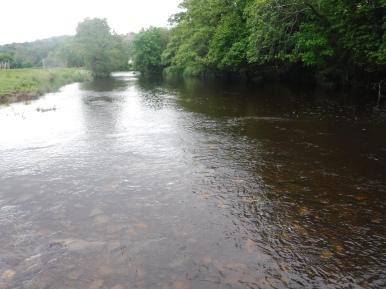 If I lived in North Wales, I think my home club would be VCAC, for it offers such splendid fishing, but its real attraction is the opportunity for an Atlantic salmon and sea trout, and many of these are caught each season. But it has beautiful WBT, too, and they are what excite me more.

To Paul and Alan, thank you…now don’t you have fishing in Wrexham and Flint, too!?

I stayed in the most comfortable place, which is Tan-yr-Onnen, where hosts, Patrick and Sara, go to great lengths to make all their guests feel most welcome (the bed linen is divine!), and they succeed. Breakfast is sublime, if you like the finest bacon and sausage, and the best black pudding, I have ever eaten, and all are locally produced.

And finally, if the S&TCA feature the same offering in their Auction this Autumn…please bid (and high) because I promise it will be worth it.