Social media working at its best

A lot of people read my blog…and after 90000 hits, every now and then I receive a message enquiring about where to, or how to. I had one a few days ago about the Tillingbourne at Albury in Surrey. And the host of a previous visit of my own, wrote to tell me that the winner of his donated WTT lot in this years Auction, bid ‘after reading of my exploits on his stream’. Lovely!

This time it was my turn, to benefit from social media.

I was web searching for trout streams in the County of the Vale of Glamorgan and discovered that one of my correspondents, Peter Anderson, he of ‘Walks and Fishes’ fame, had fished the Thawe, courtesy of a Monnow Rivers Association auction ‘win’. (Peter has suspended his writings, and I am one of probably many, who hope he will be back – lovely narrative, informed and interesting, and glorious pictures of our countryside, too)

Peter’s response to my email to him, suggested that his ‘host’ might be able to arrange a visit, and emails connected we three, which led to confirmation from Ade Nash that he could and would. Richard Jones, who is Secretary of the Cowbridge & District Angling Club, joined in Ade’s enthusiasm for my project and happily agreed a Guest Ticket, even though as Ade wrote, ‘there is no physical ticket to hand you’. How refreshing! How rare! Trust survives!

Sadly, Ade could not join me, and he suggested that finding my way to the beat he recommended might be difficult, but GoogleMaps work, and my drive to Llandough Bridge proved easy! What did I find? A sign denoting the Cowbridge & DAC rights, embellished/graffiti-ed ‘No English’ . 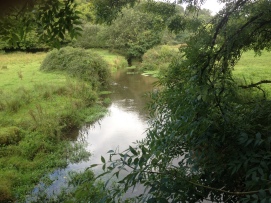 Ade advised that his stream was small (I like small stream fishing enormously, but have yet to find a definition for what is smaller than ‘small’. ‘Smaller’, ‘tiny’, ‘diminutive’…all of which could be used to describe the Thawe!) and at this time of year was overhung by branch and much foliage; access , therefore, was limited; casting , ‘tricky’, and a six foot rod was the recommended tool. I have an Orvis Clearwater, of that length but only used it once, and it was still ‘virgin’. 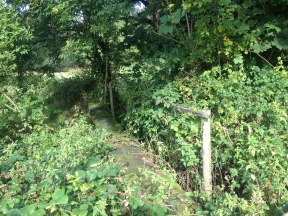 Walking as far downstream from Llandough Bridge as seemed possible, I ‘got it’, and sought pieces of water to cast into on my way back. The walk through muddy, cattle trodden meadow was slow and confirmed what I had been told of heavy rains the weekend before, but the stream ran clear. Very clear, and the wild fish here spook easily, and several tore away ahead of my clumsy treading.

I cast into a few runs with speculative dry fly ‘flicks’, switching to nymphs where I thought appropriate, but to no avail.

Clambering in and out, more than a few times, I wondered if this was to be a futile trip and when I could call on Ade for some local expertise for a repeat visit, for, after all, it took three trips to Torfaen to take a trout from the Afon Lwyd, and if a return was necessary, so what!

Nearing the top of this lower reach, I was sure I saw a small surface swirl. Then another, prompting a slow retreat, and the removal of the weighted nymph and its replacement by a #20 cdc olive pattern.

I only need one fish, so picture this, and then imagine the pleasure…

Yards below the swirls, in shallow water bathed in sunshine, just behind a sunken stone, was a small trout, holding in the flow, fins flapping, seemingly not feeding. He hadn’t seen me, nor sensed me. My first cast was short, my second, to his right, and he stayed, undisturbed. My third, just beyond his protective stone, drifted over it and just to his left hand side. It passed him, and I watched (in slow motion, it seemed) as he turned, rose, and nailed my fly. Well hooked, he pulled and struggled, but came to hand quickly.

In the beat upstream of Llandough Bridge, I caught a second in the hole scoured below a fallen tree, and on a weighted nymph, just knowing there was one there!

But my joy was…in the sunshine, where the same fish resumed station, but below where I first spotted him. Or maybe this was another ‘little fella’.