Firstly, Mark, thanks for your thoughts on where, because without these we might have floundered. We parked up near Pontivethel Bridge and walked as far downstream as we thought you recommended, and the overgrowth made assessing where should enter the river difficult, but we succeeded and by a fallen tree, so maybe that was where you intended we started! 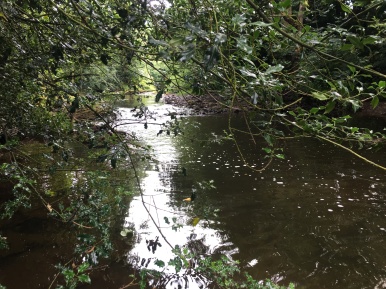 The river was very low we agreed, and we targeted the flows, for casting into the slower was likely to spook whatever might have been there. Flies were few, but we saw midge and caddis, but little else, and the fish were looking down. A persistent Halfordian, me, I fished dry, but Rhys favoured a two weighted fly, French nymph rig.
What happened?
We caught six fish…five WBT, and one grayling,

and missed/lost as many again.
Rhys’ rig netted more than mine. I lost more than he did.
Wow, it was tough! We spotted the odd fish and cast to these, and whilst moving some, rarely caught what we targeted, and most came from the quicker water at the top of the pools. Technical fishing is how I think it is described…dammed difficult, would be my description, but fishing with Rhys was fun. We leapfrogged each other easily, and he took my rod to try for what he spotted.

Chatting was more productive than the fishing, but I learned a bit from a very good angler. Dan Popp’s flies worked for me (again!)…thanks, Dan!
We did visit the end of the beat close to the Wye, but in the low flows, it was unfishable.
I so enjoyed this visit, and thank you GAS, and Rob Bending, whose efforts to support Terry Bromwell, is why I (we) did.
Best wishes to all at GAS, and glad you’re better, Terry

So many of Britain’s wild brown trout are quite small, but there are some beauties, too, including this fish which came to my net in April when fishing with Rhys Morgan.

We reckoned it to be between 2 and 3 lbs, but it is overwintered and lean. Imagine what it could weigh after gorging on Spring’s olive hatches! It came from MTAA’s water on the Taff in Merthyr Tydfil, quite close to where Will Millard, guided by my friend Dan Popp, caught a cracker whilst filming the lovely series “The Taff: The River That Made Wales” for BBC Wales. It was one of several fish rising to emerging olives mid afternoon that day, and between Rhys and I, we caught two and I lost a third. All were of similar size – remarkable.

The Taff, in my view, is now South Wales’ most impressive trout river, having recovered from decades of the ravages of industrial waste, thanks, in no small measure to the efforts of the MTAA, a club I am proud to be a member of.

Join 282 other followers
Follow Land of my Fathers – afishermansjourney on WordPress.com