Auctions are a useful place to find fishing you might not have experienced but this relies on its owners to offer it. In the Angling Trust Auction (2019) the Nevern Angling Association did this very thing, (Lot 68, as I recall) and it was too good for me to ignore, because it would in prospect, enable me to capture my 21st Welsh County, and my bid was successful.

My hosts, Dave Sweet and Phil Lewis excited me with the opportunity, and their enthusiasm was supported by my FFC friend, Stephen Heckler, who described the Nevern as a ‘gem’. I think all hoped that sewin was to be my target for it is sea trout for which their stream is famed, but where there are sewin, there are wild brown trout, my favoured quarry!

I made my first attempt at a visit in early June, knowing that the weather was ‘iffy’ at best and likely to deteriorate. At about Reading and after learning from a BBC travel report of rains of ‘biblical proportions’ on the M5, I called Phil for an update.

‘Bring your spinning rod and some worms’ he suggested, which for a dry fly addict was a major deterrent, and I turned back to London, after postponing my reservation at the Salutation Inn, a move which for a small hotel, was accepted gracefully.

‘But I will be back’’ I confirmed.

Fast forward to the end of July…

It’s a long way from London to this beautiful part of Wales, and the journey takes in the whole length of the M4 motorway, which I now know is 189 miles long! I think that Carmarthen is about as deep into South West Wales as I have visited, and the winding roads from there to my destination at the delightfully named Felindre Farchog, was, on a sunny day, a delight, and I had my first sighting of the renowned but frequently bespoiled, River Teifi.

And soon after I arrived, so did Phil Lewis, Hon Treas., of the Club, and we spent a good hour 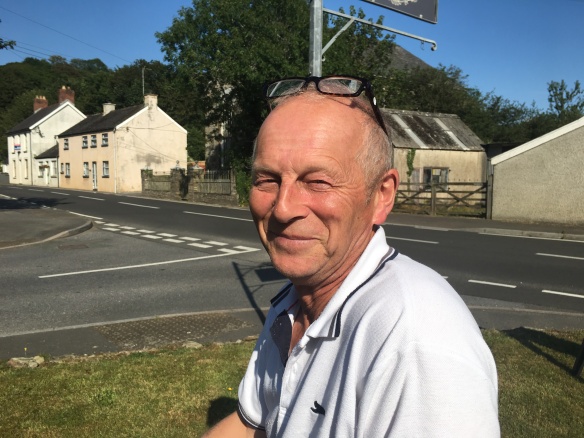 or more, chatting as fishers do, about all things River Nevern. I learned of their eight or so miles of single and double bank; of its rightful claim to be a sea trout heaven, with a few salmon thrown in for good measure, of the specimens caught in recent years; a 22lb sewin being caught recently; but how catches have fallen off due a mix of estuarine, coracle netting, and pollution, the latter from farm slurry (which kills the invertebrates on which fry feed) by unscrupulous farmers believing theirs is the right, and of an impotent NRW. How often I have heard that in my travels through Wales, along with the belief that the Assembly is in thrall of the farming community, to the detriment of conservation. Welsh anglers must get aligned to fight off the dual threat from the farming powers, and a well organised kayaking lobby.

But back to the Afon Nyfer. It’s a short river, just 11 miles long from its source from a spring in the south west slope of Frenni Fawr, near Crymych, to the sea, at Newport, on the Cardigan Bay.

Ample water for the 109 members, some of whom, under the watchful and experienced eye of Phil and his fellow Committee members, undertake the maintenance required of a spate stream which rushes through with winter flood waters after heavy rains.

And what a good job they do. The short beats I fished were testament to their effectiveness.

Phil warned me that “the wild brown trout are really rather small”, to which I responded that that did not worry me, “so long as they are beautiful!” They are aggressive feeders he said, and would often come to a slow retrieved Rapala, which at three o’clock in the morning must be a nuisance to sewin hunters.

Upstream from the village is where I headed, and soon learned that here is a river, which over thousands of years has etched out a path through reddish rocks, to create a steep bank, which in its shaded places contains ferns and lichens and more, and is most easily accessed by mountain goats, or Welsh lambs. At this entry point its feels like an assault course!

But from above, it is easy to spot the pools where you just know, lurk some silver tourists, resting before their nocturnal games begin. In the meadows nearby, nettles and balsam grow to five feet. More work here for the Nevern team to conquer this Japanese invader, I think. 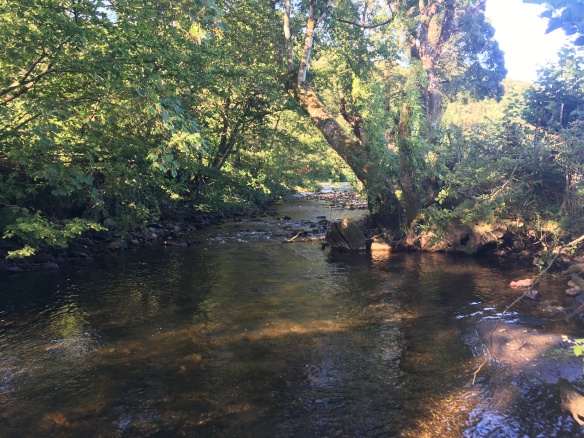 There are runs between narrows opening into pools and glides of only a short distance, before turning abruptly and creating yet another deep dark water bend, and in the sunshine pouring between overhanging alders, a dart here and there, revealed the presence of the small trout Phil told me about. Stealth was important for the fish in the feeder lines at the head of the pools did not need to alerted to a two-legged predator! And these were the lies where, five Pembrokeshire wildies succumbed to my elk hair caddis. Phil was right.

They are small, and about four to the lb., but they are lightning fast, and scrappy. I was not sure what their food source was, because fly life was sparse, on this afternoon, but Phil’s fly recommendation to me was either a black gnat, or caddis, so that suggests terrestrials, midge or sedge. 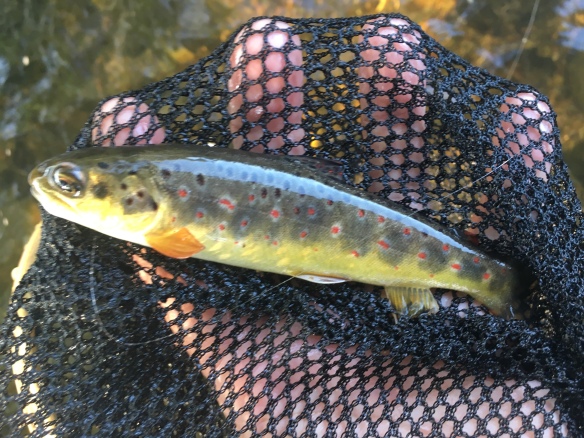 Felindre Farchog is a small village where everyone knows each other, and during my chat outside with Phil, he was greeted, or greeted many. Exchanges more often than not, were in Welsh. Everyone takes care and looks out for each other in this small community. How unlike urban folk! My overnight sleep was in the Salutation Inn, where Brenda and her team made

me welcome, in English. Mine was a simple room with great bedding (how important). Supper, a local lamb burger, was delicious, and the purpose of my visit intrigued the friendly locals.

Thank you, Nevern Angling Association and Phil Lewis and Dave Sweet; thank you Brenda and all at the Salutation Inn for having me; and thank you the River Nevern, for giving me my Pembrokeshire trout. Just Carmarthenshire to ‘net’ now, for a full house!