After a somewhat frustrating morning on the Taff at Abercanaid where I lost three casts and six flies, fished ‘duo’, in trees and bankside scrub, but still landed my first wildie of the season on a lovely sunny morning when wading in a low stream with algal growth on the rocky bed made wading very precarious, I decided to head to an MTAA beat where wading would be easier. Quakers Yard, perhaps.

But driving south along the A470, Tonka Too took on a life of its own, it seemed, and we headed to Cardiff, instead.

I knew that the Ely had some ‘free’ fishing below the bridge on the A48 and that was where we were headed, Tonka and me, that is.

On arrival, I walked the bank, thinking that this was a bigger river than I had imagined, and I spent some time just looking. But not for long, because a rising fish, under overhanging leaf free bushes, on the near bank persuaded me to get my rod. Getting into the water was a downward slide over large angled boulders into a stretch where the bed of small rocks made wading easy. 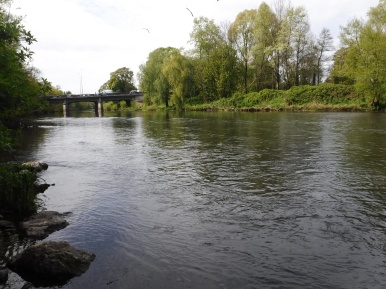 Some more rises in roughly the same area encouraged me and I waded closer.

I think the attractive, were Large Brook Duns, smaller than March Browns, but tan coloured also and with two (or was it three) tails. The fish, and there were now three or four rising, were ignoring the duns, so must have been taking the emergers.

I had my 10ft, 4-weight rod, rigged from the morning at Abercanaid, and removed the #16 Adams (Gareth Lewis’ tied) and smaller, tungsten beaded PTN, and replaced these with a single emerger from the selection tied by Simon Clarke, which I had ‘won’ in this year’s Monnow Rivers Association auction. Browny/greeny bodied, with spiky elk hair keeping it upright, in the surface film.

First cast and I was ‘in’, then, just as quickly, ‘out’, and never knowing what had grabbed a good offering, obviously.

It was on, but what was it? It flashed, ran, but never close enough for me to determine what I had hooked. Then? Damn! Panic! I lost traction of the retrieved line hooked under my right forefinger against my rod handle, and fumbled quickly not knowing whether having done so, my prize was still attached. (Heh! We have all been there!!)

Stripping quickly, the line tightened and he was still on, which surprised given the barbless emerger he had taken. He flashed left and right, plunged, ran, but tired, and when netted, he would have heard me say, as if he were interested – “You, are my Cardiff trout!”

Quickly photographed and released, and this angler, happy, I flicked again and hooked but lost another, but ‘what the hell’?

Back home I downloaded my pictures and searched Googlemap to identify some reference points to describe my whereabouts.

I must have been on the Glamorgan Anglers Club water, and to this Club I offer my most sincere apologies, for I would never, knowingly, fish where I should not.

I have written to GAC, accordingly.

I am on a personal ‘quest’ to catch a trout from a river in every county in Wales.                 This week, I caught a trout in the County of Cardiff, on what I thought was the R Ely, but I now realise (after searching some detail via GoogleMaps) that there are two bridges on the A48, to the NW of the City Centre, and I was fishing below the wrong bridge, and on what is probably the water of the Glamorgan Anglers Club, where I had no right to be fishing. I am embarrassed by my oversight and would like in retrospect, and with your agreement to, make good a ‘wrong’, presuming that my conclusion is correct. Will you allow me to do this? What will be appropriate? Please let me know

What a good man the Chairman is –

“Hi Anthony and thanks for letting us know.  Don’t worry about righting a wrong.  We have stretches of the Taff, Usk, Wye and Trothy all of which contain trout and can be fished on our standard coarse licence if you”re interested