I am sure that there is a trout with my name on it in the Ebbw near Risca, but that eliminates the Ebbw as far as the county of Caerphilly is concerned because already, it has featured in my ‘Quest’ as my Newport ‘win’ and I try to find new rivers in all of my searches as I seek to add to my counties’ list.

So the Rhymney it was most likely to be.

But this tale is not about trout..!

It started with a visit to Tony’s Tackle Shop in Caerphilly, a veritable Aladdin’s Cave of a place, but mainly for coarse fishers. His shop is within a well struck four iron of the Castle, which on a sunny day as it was when I visited, is just a splendid monument and with many a tale to tell, no doubt. Tony issued me a day ticket after enquiring delicately whether I was entitled, a senior, you know! But where to fish? He suggested the Caerphilly & District AA water below the Industrial Estate at Pant Glas, but I was none the wiser. The local postie was delivering and he enquired, “would the post code help?”…what a Star, and what a lovely attitude.

The beat is pretty.

It was a blissfully hot and bright day, and looking down onto the stream there were many enticing places. “Fish the runs below the weirs”, Tony advised, and for good reason. For whilst sheltered from the bright light by overhanging trees, the fish would be disturbed by the many late morning walkers and dog exercisers, and would be less likely to be feeding, if at all, in the silky glides.

And there were so many perambulators, two and four legged, on the Rhymney Riverside Walk,

I thought…it’s nearly lunchtime, so why not wait until hunger pains and noon plus traditions kick in, and they all go home, or to the pub! And they did, and at 1pm I was alone.

It was not the best of fishing conditions but I had driven from London and was on a mission, was eager, so did. 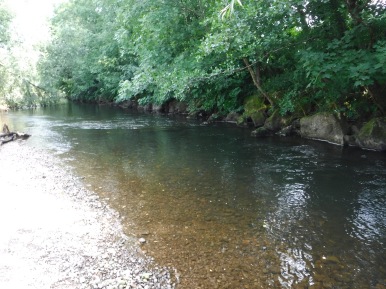 And on my third cast, fishing a duo of an Adams and a #22PTN, I felt the tiniest pull at the end of the swing, and this was the culprit!

I didn’t know what this was and Terry Bromwell (of which much more – see Rhondda Cynon Taff) suggested an FB enquiry, which via the WTT, Merthyr Tydfil AA, and Gwent AS (to all of which I subscribe), produced a series of suggestions, and to all who did, my thanks. Because I was baffled, and whilst I thought on magnification, there were signs of an adipose…the general consensus was that I had caught ‘phoxinus phoxinus’…a minnow! But what a specimen!

“Tony did you weigh it? The British rod and line caught record is less than 1oz Your one looks like a contender it must be more than 3 inches in length” asked my chum, Paul Jennings!

But blimey! I may, unwittingly, have broken the British record!!

Anyway, no trout, but half a dozen grayling later, I retreated, and began to reconsider how to ‘net’ the Caerphilly trout I seek.