The second meeting of the Moreno Appreciation Club (MAC) was held on Wednesday, June 20th 2012.

The Founders were privileged to receive the President…who presided!

The Founders and the President were excited to be joined by ‘Novitiate’ David Fraser, who had been appraised of the Rules of the MAC, and indeed had commented on them through a series of exchanges, which included some from another (potential) Novitiate, one Howard Mann, who was credited with the most original excuse (albeit very late) for ultimate failure to attend – the swimming pool at his ‘place ’in the Pyrenees was leaking and he needed to go and fix it! And the meeting therefore started ‘a quatre’.

After a hearty ‘Full Welsh’ breakfast at the Three Salmons in the town of Usk, the assembly moved to the town bridge, where, after peering into the coloured flows, it was decided that after recent rains, and whilst visibility had improved on the previous day, and it was possible actually to see the bottom of the river in the shallows, the overall opportunity was limited and the MAC deserved better than was likely on this wonderfully variable beat.

A visit to the legendary Sweets, was the second item on the agenda, and the MAC was privileged (that is two privileges in one AGM!) to be greeted by the similarly legendary and lovely, Jean Williams, 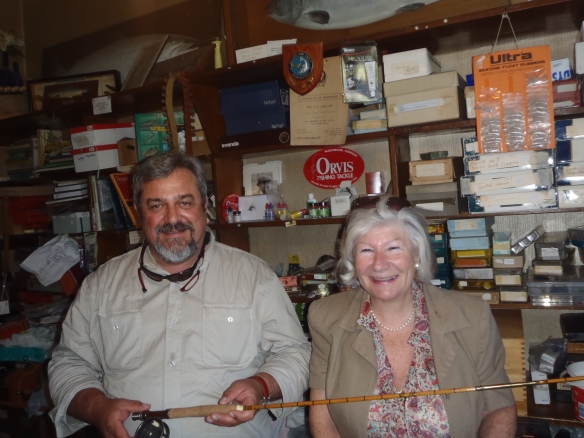 whose shop ‘blew away’ the President.

The river being in the condition that it was, a call was made to the Wye Usk Foundation and this delivered four day tickets in most efficient fashion, for the town water in Brecon, 25 miles upstream, and the MAC arrived riverside at circa 1030am,to find the river USK in good nick.

Moreno wands were waved by the Founders and the President,

and all chose to fish ‘dry’ on water which had the lightest tinge of colour, but where, in sunny conditions, it was noted, also, that a few fish were  sipping emergers in the margins and under overhanging branches, and hopes were high.

Modesty aside, the first fish, a monster of ten inches, was taken by Founder Mair,

on an Adams, and a better fish, shortly thereafter, by Founder Tribe. 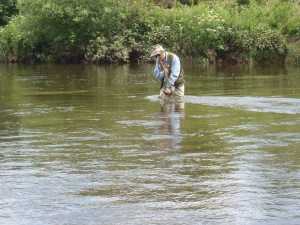 Whilst enquiring about the progress of the President, there was nearly an International Incident, when the President missed the only interest he had, and Founder Mair, left him to ponder what might have been.

The morning fishing produced just these two fish, and the assembled retired to partake of an Ale, as prescribed by the Constitution.

A second altercation followed at lunch, when it was necessary to remind the Novitiate of Rule 3…’ All fishing MUST be undertaken during Club events, exclusively and therefore, only, with a Moreno rod’ and that failure to do so would require of the defaulter, that the cost of all libations would be payable (Rule 4)

Founder Tribe wondered whether what he had been doing all morning should be classified as ‘fishing’ in any case; the Novitiate claimed ignorance, and threatened legal action, and since MAC funds are limited (zero) and the Novitiate is extremely rich, he was let off with a warning that future breaches will not be tolerated. His pathetic attempt to bribe the President by purchasing tasty Italian wine at dinner that evening was noted, and the notion that he might be invited to MAC2013 will be debated those with influence.

The afternoon was diluted by the absence of Founder Tribe, 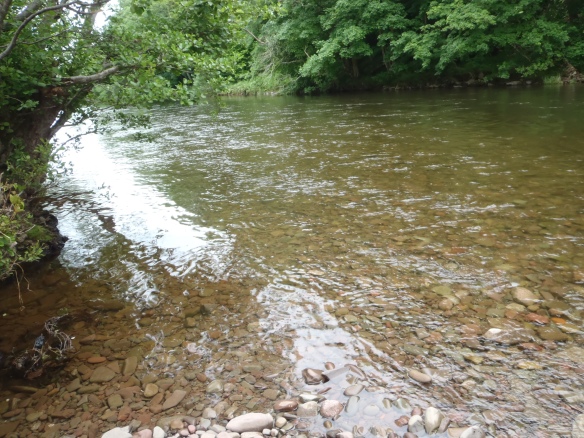 but the President, Founder Mair and the Novitiate all caught fish, and whilst there were none of note, a dozen netted was considered to be a worthy result. 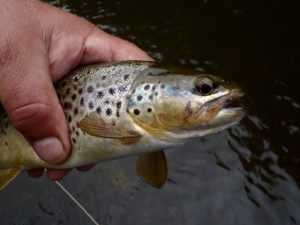 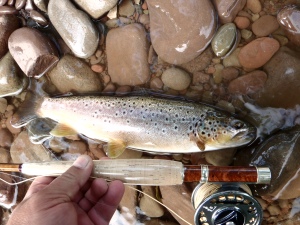 The rains of which we have become all to accustomed this season, arrived shortly after fishing ended at 6pm.

Drinks (ale) en route to the Three Salmon, were taken at the legendary  Gliffaes Country House Hotel, and the remainder of the journey to Usk was made in silence as the President and the Novitiate enjoyed a quiet sleep.

Dinner was followed by the required large ‘Jacks’.

The meeting ended in good heart, and the Founders wish to record their delight by the attendance of their President, and also, by Novitiate Fraser. Quasi Novitiate Mann, does not know what he missed (or didn’t)

Conclusion: Moreno’s ‘wonderful wands work’ in Wales. The Usk is a fantastic trout river, and the favourite in Britain of many…it is not an easy fishery, but it rewards the diligent. Hatches are short, and fly life is less prolific than in recent years, and in this most testing season, good anglers will prevail….as the MAC did!